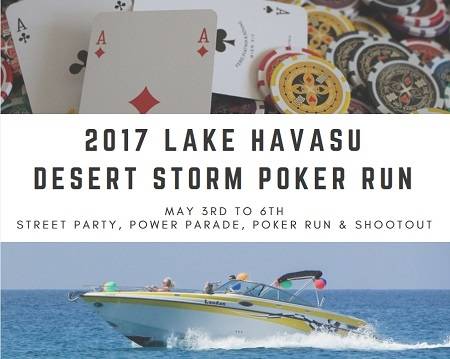 The buzzing you hear above and below the lake next week will be coming from the 2017 Lake Havasu Desert Storm Poker Run.  That’s because some of the teams employ the help of a helicopter overhead to watch their progress.  While it costs $500 per team to participate, spectators watch the action for FREE.

The event kicks off Wednesday, May 3rd with Krusin’ for Kids.  Volunteers take special needs and underprivileged men, women and children out onto the lake.  Cruises start out at the London Bridge Resort.  On Thursday, the 2017 Lake Havasu Desert Storm Poker Run takes it to the streets for a fun, family-friendly street party.   McCulloch Blvd shuts down street traffic from Capri Blvd to Acoma between 12pm and 9:30pm.  Participants in the poker run display their boats along the boulevard.  Visit with the owners and see their boats up close before the big event.

Speaking of “big events”, the actual 2017 Lake Havasu Desert Storm Poker Run takes place on Friday.  But before the teams head out to pick up the first card in their poker hand, they parade through the Bridgewater Channel at 10am.  The best places to see the parade include the English Village, London Bridge Beach, London Bridge Resort, Rotary Beach and Thompson Bay.  Boats take off around the island right after the parade ends.  So, if you want to watch the excitement from your own boat on the lake, make sure you anchor somewhere outside of the poker run path by 10:45am.  Land lovers are invited to hit Windsor 4 at Havasu State Park for the Power in the Park Festival taking place from 10am to 5pm.  At the festival, listen to live music, see classic car shows, visit vendors row and watch the Big O Tires Burnout.

On Saturday, the last (and some say most exciting) portion of the 2017 Lake Havasu Desert Storm Poker Run takes place…the Desert Storm Shootout.  Thirty classes + 67 runs + a two mile course = high energy excitement on the lake.  Racing starts at 9am and runs from Site Six to Spectator Point.  But, I would suggest you come a little early to scout the best vantage point along the Island. 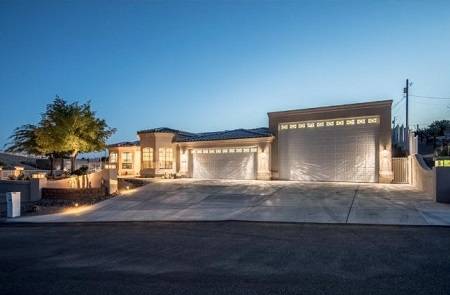