The final stages of construction on Heart of Havasu Park has finally begun, which means it won’t be long before it’s complete. The landscaping company 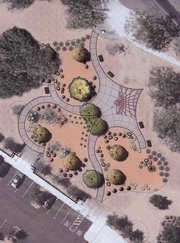 started moving dirt on Heart of Havasu Park on Monday. So, now the dreams of the 2011 leadership and development team can come to light. They had fundraisers to help execute the big project and make it a reality. Now, as it nears the finish, they will replace 21,000 square feet of sod in front of the Lake Havasu City Police Department and Xeriscaping it with the use of native rocks and plants to help conserve water.

In the park makeover you will find three heart shaped landscape areas that will stand out beautifully with the removal of the Bermuda grass that is being replaced by beautiful natural rock and plants that are native to the region. Plants that will require very little water is what is needed. Instead of using the thousands of gallons of water, which has been a big expense for the city over the years.

All of the funding for this project has been through donations, selling stepping stones that are individually engraved, raffles, hosting various fundraising events and dinners along with sponsorships.

The park was unveiled this past May. However, funds were still needed for the finishing touches. The total of the project is about $30,000. And, the final touches will include a third ring with additional pathways.