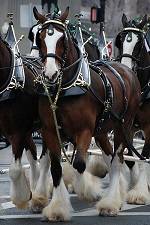 By now, we all know about the Budweiser Clydesdales.  They’ve become a glowing symbol for the Anheuser-Busch Corporation the world around.  In fact, it’s hard not to think about Clydesdales without conjuring up an image of a cold Budweiser, especially around Super Bowl time.  This weekend, the Clydesdales come to Havasu to present a local Lake Havasu business with an Ambassador of Excellence Award.

Romer’s Beverage opened its doors in Lake Havasu City earlier this year.  Even though Romer Beverage president Chip Romer found out about this honor last November (making this the third year in a row), the beverage company has been working with Anheuser-Busch to schedule a time that would be most beneficial for the Clydesdales to make an appearance.  Lucky for us, they decided that this weekend would be the best time for the Clydesdales to come to Havasu.

The schedule of appearances for the Clydesdales while they are in Lake Havasu City include:

I don’t know about you, but I am really excited.  The Clydesdales come to Havasu tomorrow through Sunday.  I know that I, for one, have every intention of seeing these magnificent creatures up close and in person.  Maybe I’ll see you there!