Yes, you read that right…”waterless” boat races.  The speedway hosts the Havasu Waterless Boat Races 2017 on the first weekend of the new year.  But how can boat races be “waterless”?  Drivers race around the oval towing their boats behind them, that’s how!

Everyone knows that boats are a big part of the Havasu lifestyle.  But who says that boats must stay on the water in order to enjoy them?  At the Havasu Waterless Boat Races 2017, we take them off the water and race them around the track instead.  It really is something you have to watch in person to truly appreciate.

Tickets for the Havasu Waterless Boat Races 2017 break down to $12 per adult for general admission.  Seniors, members of the military (with a valid ID) and handicapped guests pay just $10 per person.  Children ages 6 to 16 get in for $6 each.  Meanwhile, children ages five and under get in absolutely free of charge.  LHHS students receive a $1 discount when they present their student ID at the gate.  VIP seating will run you $25 per person (totally worth it for a view of the entire track).  Family packs are available for $25 each.  They include general admission for two adults and two children. 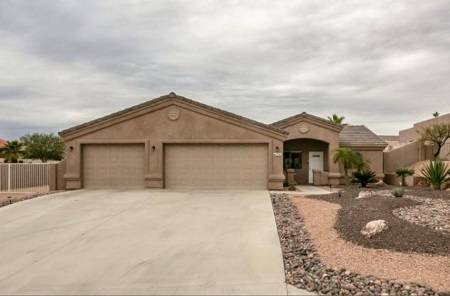